Since their July 2014 launch, SkillLane has already signed on 70 instructors, 18,000 students and have recently raised an undisclosed post-seed round from Metaliq Growth Partners.

There has never been a better time in Asia for EdTech. According to GlobeNewswire, US$2.3 billion was injected into the education technology space last year, which has seen a 500 per cent growth since 2009. Suffice to say, startups in this arena have a lot to work with in terms of market opportunity within the region.

Besides 600 million K-12 students being based in Asia, which is 10 times that of the US, Asia is also the fastest growing eLearning market in the world. In fact, there has been a sharp uptake in deals going to self-paced eLearning companies, hitting US$1.07 billion in 2014, which is up $564 million from the previous year.

Thailand's SkillLane is one startup in the self-paced eLearning space capitalising on this opportunity. At the helm are Titipong Pisitwuttinan and Ekachat Assavarujikul, two entrepreneurs that began putting the pieces of their EdTech company together while earning their MBAs at the Kellogg School of Management at Northwestern University. During their time in the US, they noticed that online platforms for professional and personal development were plentiful, but there resources were scarce in their home country. 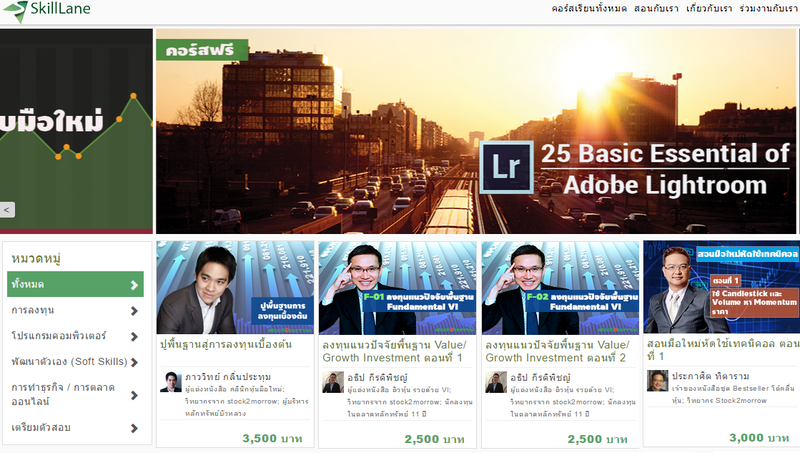 "In the US, there are a lot of resources for people to improve themselves, but very few in Thailand. On Google, there are a few in Thai but a lot of Thai people don't know English very well, so it's hard for someone to learn new skills" said Pisitwuttinan. "90% of people want to learn new things, to be better, have more income – but almost all of them don't have the time to gain new skills. They have full-time jobs and are too tired to go to night classes. On the weekends,they spend time with their families so there's no way for them to learn new skills."

Catering to the Southeast Asian culture where work-life balance is a high priority, SkillLane offers courses in bite-sized pieces so users can juggle their day job, social life and family obligations. "We are focussing on young professional segments of the market and have courses in five categories that tailor to that interest: Computer, soft skills, test preparation, entrepreneurship and investment." said Assavarujikul. "An average courses is two to three hours and we divide that long video into smaller clips that represent one course chapter, and it makes it easier for students to learn."

SkillLane works closely with instructors to create courses, from the program name, determining the target audience, to what the price and curriculum should be. They also collaborate with content providers in tailoring the courses for the Thai market.

Since their July 2014 launch, they've already brought on 70 instructors and 18,000 students just within Thailand alone. Operating on a revenue sharing model, courses on SkillLane range from THB$1,000 (US$30) to THB$3,000 (US$90) and a few success stories have already come through. While one student reported a promotion at work due to his newly-minted Excel skills, another said they were inspired by their entrepreneurship course to do their own startup.

SkilLane has also recently raised an undisclosed post-seed round led by Thailand’s Metaliq Growth Partners and has indefinite plans to expand into other Southeast Asian countries, possibly Indonesia.